What is social anxiety disorder? Before answering this, I will relate a short experience of mine.

I remember once being called upon by a friend of mine as “antisocial” only because when the two of us sat on a bus towards campus, I preferred the company of my earbuds than that of his mouth. So quick are we to judge those who slightly deviated from the this constant need of ours to share and reshare our thoughts in this hyper-socialized modernity. Of course, that is not to say that I hated socializing, I certainly don’t.

But I lean slightly more towards the introverted side of our temperamental spectrum, and needless to say, am more likely to shy away from a large social gathering than your average Joe. And the first scenario wherein my friend so eagerly diagnosed my shyness and introversion as a personality syndrome is not the first of its kind either, as I have heard my friends describe others who have a similar preference as mine being described as socially anxious, or socially phobic, if there is such a term for it. 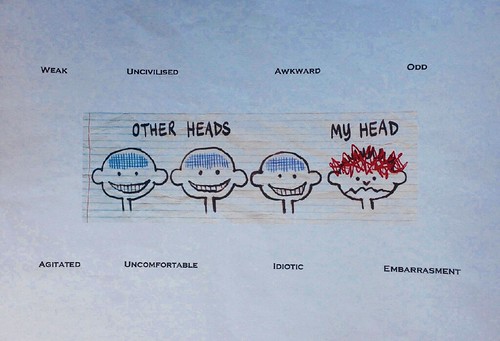 Why shyness is different from social anxiety disorder?

Shyness, however, is entirely different, qualitatively, when compared with social anxiety disorder (SAD) (aka social phobia), and let’s dispel the notion that social anxiety disorder is a secret governmental and pharmaceutical conspiracy to intentionally and inappropriately medicalize a perfectly normal human reaction for a quick cash grab. In a study by the NIMH in the United States, while half of its sampled youth population self-identified as being shy, only 12 percent qualifies the criteria for SAD, and what’s more interesting, is that 5 percent of those who did not identify as shy met the criteria for SAD 1. So what makes SAD such a severe condition that it must not be confused as your everyday shyness? 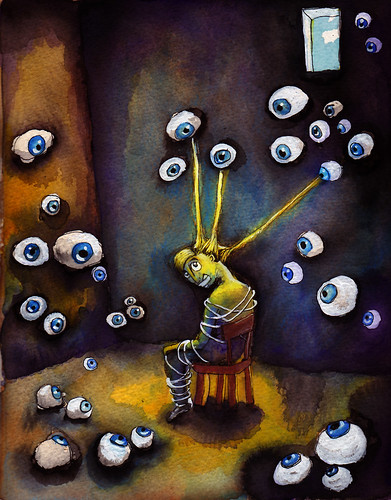 For one, even though both share some commonalities, and originate from a similar source (namely, a nervousness of being in a social situation and being judged by others), SAD is this fear and anxiety brought to the extreme, and typical reactions to such intense levels of anxiety is avoidance or having to endure the social performance-based situations with high levels of distress, thus further impairing their ability to function in their everyday lives 2. In short, shyness is a personality trait that is stable and enduring throughout a person’s life, and would not wreak havoc on a person’s life (though we might begrudge the fact that we blush more easily in front of others, but I digress), whereas SAD is an overall negative experience for those who are inflicted by it 3. 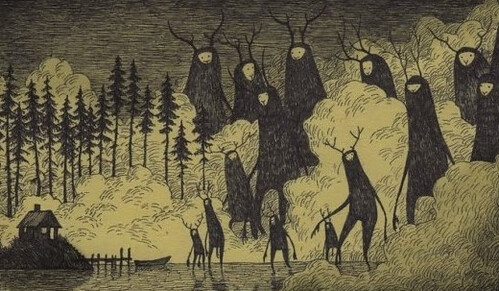 Below is the full criteria for one to be diagnosed with Social Anxiety Disorder in the current edition of the DSM (5). Additionally, the ICD-10 identifies several physiological symptoms that accompany SAD, namely the usual suspects that typically comes with other phobic disorders: blushing, excess sweating, trembling, palpitations, nausea, and for some, stammering. For some, there might even be an occurrence of panic attacks especially when the discomfort and anxiety levels is much more intense than usual. 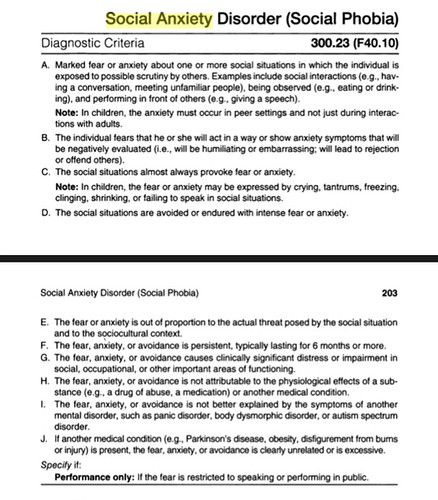 People with SAD will have little to none social or romantic relationships, and this makes them feel powerless, lonely, and shameful of themselves 4. From a cognitive perspective, they may have a heightened sense of self-awareness and self-consciousness, thus making them pay extra attention to their performances when in social activities, and because of the skewed perspective they have of reviewing their performances and perhaps because of a high performance standard that they set for themselves, this may lead them to negatively perceived these performances.

And this leads to the behavioral aspect of SAD, which is when individuals will try as hard as they can to avoid future social situations where they have previously failed (or perceived themselves as having failed) before. This avoidance can range from mild behaviors, such as avoiding eye contact or crossing arms to hide their shaking, to severe levels, such as pathological/compulsive lying in order to preserve self-image and avoid judgement 5. 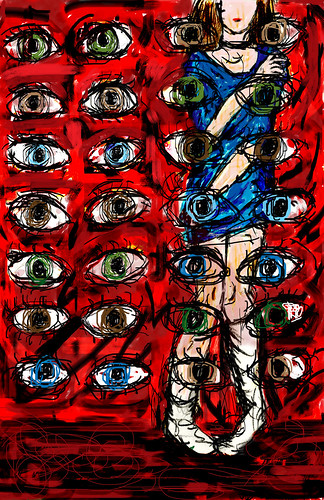 Some of the causes include genetic factors, previous social experiences, as well as cultural influences, in addition to the cognitive factors and negative thoughts that are previously discussed in the last section of this article. One of the more noteworthy research findings is that a childhood with overprotective and hypercritical parents does correlate to latter day social anxieties, with a special emphasis on an insecure attachment towards mother-child relationship being twice as likely to develop such a condition 6 7. Of course, previous experiences play a heavy role too in shaping an individual’s future, and traumatic social experiences are especially inducive to an individual developing SAD, as a specific traumatic (e.g. bullying) or humiliating social event in the past can trigger the onset or worsen the disorder 8.

Read this article to know more about the causes of anxiety disorders. 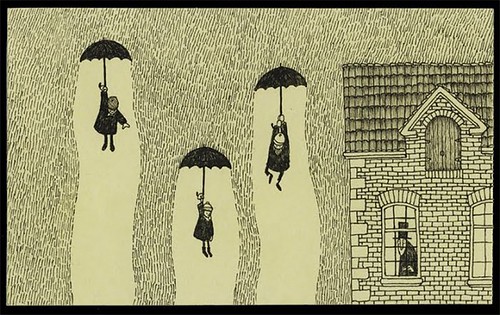 Lastly, one’s culture can play a role too in the prevalence in developing SAD, especially one’s dominant cultural and societal attitude towards an individual’s shyness, and this may in turn affect one’s relationship and views towards relationship formation, and shame in general 9. As such, people in predominantly “Western” cultures may be more likely to develop SAD if their parents use shame as a disciplinary tool or overemphasize the importance of the opinions of other’s. While Eastern cultures who have an excessive need to gain approval and acceptance from society en large would be more likely to fear of rejection from other members of the same social group 10. 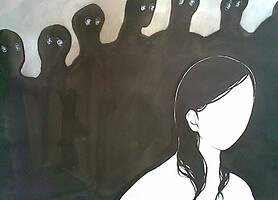 One of the most common forms of psychotherapies used to combat SAD is of course, the one and only, CBT, which directly addresses the negative and skewed worldview that individuals with SAD typically has. But one of the more recent forms of treatment is Acceptance and Commitment Therapy (ACT), which can be seen as an offshoot of CBT. ACT has a heavier emphasis, however, on the individuals’ ability to accept the unpleasent symptoms rather than uselessly fight against them, while at the same time embraces one’s psychological flexibility (i.e. the ability to adapt to the constant changes and demands of different situations, and the ability to shift perspectives in order to balance out warring desires) 11. 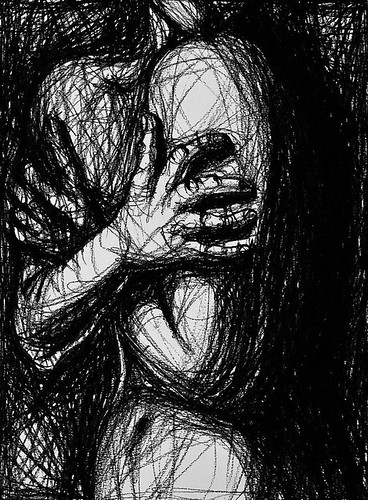 As for medications, the usual prescriptions for SAD are Selective Serotonin Reuptake Inhibitors (SSRIs), and Monoamine oxidase inhibitor (MAOIs). These medications work by balancing out the neurotransmitters in our nervous system, either by letting selective neurotransmitters linger on in our nervous system, prohibiting them from exhausting out of supply (therefore, producing a calming effect), or prohibiting certain neurotransmitters from being secreted. But as with any form of medication, there are certain side effects (nausea, sleeplessness, fatigue etc.). So please do follow the guidelines and dietary changes prescribed by the doctors. 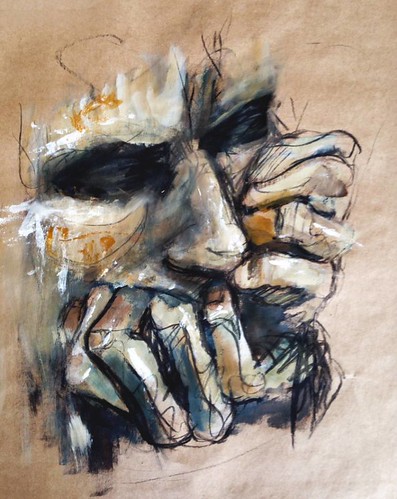 Phobia: An Overview of Specific Phobias

By mypsychologychannel5 days ago
Mental Health

How Do I Manage My Emotion?

Do I Need Psychotherapy or Counseling Services?

What is Psychotherapy / Counselling? Does it work?